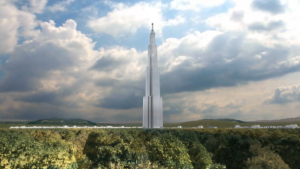 A Chinese construction company is setting out to build the world’s tallest building, in Changsha, China. And it says it can finish it in one-tenth of the time it took to build the current record holder. Broad Sustainable Construction, a company known for building high-rise buildings in record-breaking time, said it will break ground in June ’13 on the project, which will stand at 838 meters, or 2,749 feet, when completed. The building is slated to make an incredibly speedy progress, finishing construction in seven months. Construction of the Burj Khalifa in Dubai, the world’s current tallest building, took approximately six years to complete. The building will be called “Sky City” and will exceed the Burj Khalifa by roughly 10 meters (30 feet). While the Burj Khalifa is in a popular Middle East tourist destination, the biggest city in the United Arab Emirates and a worldwide aviation hub, the new Sky City will be erected in the middle of a field in Changsha, the capital of the province of Hunan — a city of 7 million, to be sure, but located in the middle of China, with the closest international metropolis being Hong Kong, 600 km (400 miles) to the south.
Share This: