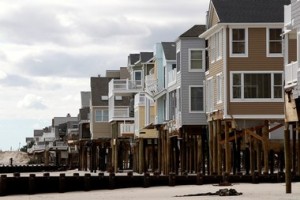 Homeowners battered by Hurricane Sandy got some relief recently, when the federal government issued revised, scaled-back flood maps and elevation requirements. For architects and builders working on those homes, it means many long-stalled rebuilding projects may soon pick up.
The new maps shrink the so-called V zones in Hudson, Monmouth, Ocean and Atlantic counties — there areas where homes are most prone to flooding — moving many dwellings to the lower-risk A zones. That likely means simpler, cheaper rebuilding projects and lower insurance premiums, not to mention owners’ increased willingness to move ahead after the months of uncertainty that followed the October storm.

Meanwhile, some local governments have addressed another issue in Sandy’s aftermath. Towns like Point Pleasant and Manasquan have loosened zoning restrictions for residential heights, allowing homeowners to comply with the federal guidelines without conflict.

In the coming weeks, towns will work with FEMA to determine how to apply the guidelines to current building codes. Because the maps were only released very recently, town officials were still analyzing local data and could not specifically comment on how it may be applied. Changes could include elevating homes in a number of ways, breakaway walls that would fall away against the force of waves, deep pilings to better anchor a buildings being pushed by the force of rushing water and flood vents to allow water to pass through the foundation of shore front property.
Share This: