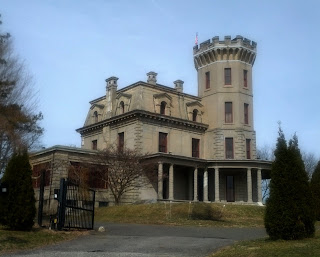 I made an unexpected stop in Rye, NY today and I was lucky to stumble upon the William E. Ward House. The building is located on a large lot in a residential neighborhood on the border of New York and Connecticut.

Constructed from 1873-1875, the house was the first structure in the United States built entirely of reinforced concrete. Mr Ward, a mechanical engineer, collaborated with architect Robert Mook, to create this imposing 17 room mansion. The building is constructed entirely of Portland cement based concrete reinforced with iron beams and rods. Only the doors, window frames and trim are of wood. 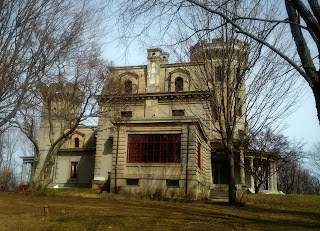 A combination of Gothic Revival and French Second Empire styles, the building features a four-story octagonal tower that expresses rather than conceals the concrete. The mansion was jokingly known as “Ward’s Folly” by neighbors until its durability and character caused it to be re-dubbed “Ward’s Castle.”

The castle was later bought by “Beetle Bailey” cartoonist Mort Walker, and it was home to the Museum of Cartoon Art from 1976 to 1992. The building is currently a private residence.


I was caught without my SLR so these camera phone pictures will have to do.