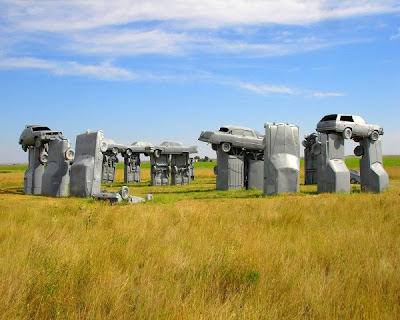 Jim Reinders, an experimental artist with a history of using curious media, became so enthralled by the beauty of the famous Stonehenge in England that he had to recreate it. However, Reinders, instead of using stone, decided to embrace a more modern, Americanized approach. Shortly after his father died in 1982, Reinder came up with the idea to build “Carhenge”.
Five years later during a family reunion, with the help of some thirty family members, Reinder used thirty-eight automobiles to mirror the position of the rocks that construct Stonehenge. All the automobiles, which include a handful of cars, a pick-up truck, an ambulance, and a 1962 Cadillac as the heel stone, accurately and proportionately depict the real life structure.
Completing the sculpture just in time for the Summer Solstice, the family celebrated their achievements. The local residents of Alliance, Nebraska were initially disturbed by the presence of Carhenge, believing it to be an eyesore, but over time have grown to accept and love the structure that put their town on the map.
Submitted by: Robert F. Barranger, AIA Ref: DM
Share This: